ACR 2015: Bedside US may not capture whole picture in ER

In a retrospective review, a research team led by radiology resident Dr. Myrna Wallace-Severa found that point-of-care ultrasound studies on first-trimester patients by ER physicians had a 24% discrepancy rate with exams performed in the radiology department and interpreted by radiologists. They shared their findings in an e-poster at the American College of Radiology’s ACR 2015 meeting this week in Washington, DC.

“As radiologists, we need to be very present and still encourage ER physicians to go ahead and get that official ultrasound when it comes to first-trimester ultrasound patients, because misinterpretation or just missing things on those patients can be life-threatening,” she told AuntMinnie.com.

While point-of-care ultrasound is becoming more common in managing first-trimester patients in the emergency setting, interpretation of these exams is often complicated and difficult, Wallace-Severa said. Ultrasound is an operator-dependent modality, and misinterpretation can have fatal consequences.

At Santa Barbara Cottage Hospital, ER physicians perform and interpret bedside obstetric ultrasounds — frequently just transabdominal studies — using compact ultrasound systems, while radiology ultrasound exams, which include both transabdominal and transvaginal studies, are supervised and interpreted by radiologists. The radiology ultrasound exams are performed in the radiology department by sonographers certified by the American Registry for Diagnostic Medical Sonography (ARDMS), who are available 24/7 to scan patients, according to the group.

A previous study in 2012 at the hospital showed a significant discrepancy between ER physicians and radiologists in the interpretation of first-trimester obstetric ultrasounds; the researchers wanted to perform a follow-up study to see if there had been any change. The retrospective study included all ultrasound studies found on the hospital’s PACS from June 2013 through December 2014 that had separate interpretations by ER physicians and radiologists.

Cases were excluded from the research if more than 24 hours had passed between the ER-performed studies and the radiology ultrasound exams, or if exams were performed during two different emergency department visits. ER ultrasounds without documented reported findings were also left out of the analysis.

For the remaining 75 cases, three radiologists certified by the American Board of Radiology independently reviewed just the final reports of both the emergency medicine physicians and the radiologists. The reviewers determined if there was significant concordance or discordance in a yes/no fashion, and a majority vote was used to make the final ruling; discrepancies were considered significant if they included disagreement over the presence of intrauterine pregnancy, gestational sac, fetal demise, and ectopic pregnancy in the presence of a positive pregnancy exam.

The researchers found a significant discrepancy rate between the emergency medicine physicians and the radiologists.

The ER physicians and radiologists differed in their interpretation of 18 of the 75 cases, for a discrepancy rate of 24%. When compared with the radiology ultrasound findings, the emergency room studies showed the following:

“The practices around bedside [ER] obstetric ultrasounds and just really the overall appropriateness of the studies should be looked at because the discrepancy rate is still pretty high,” she said. 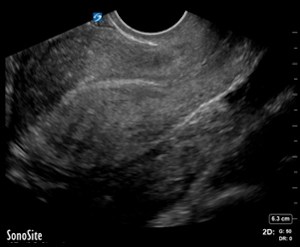 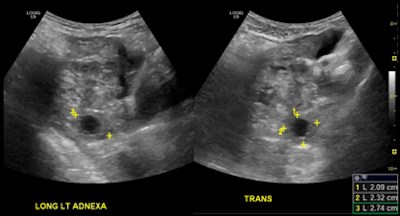 ER-performed ultrasound (top) was interpreted as not having an intrauterine pregnancy. On radiology ultrasound study (above), a radiologist diagnosed an ectopic pregnancy in the left adnexa. All images courtesy of Dr. Myrna Wallace-Severa.The discrepancy differences could be due to a number of factors, including training and experience, according to the researchers. For example, guidelines from the American College of Emergency Physicians (ACEP) for training pathways and the use of bedside ultrasound recommend that residents perform a minimum of 150 bedside ultrasound scans in their residency training to reach competency.

“I think any radiologist who does ultrasounds can tell you they do that amount in a week,” Wallace-Severa said.

Furthermore, a 2010 survey of emergency medicine residency programs in the U.S. found that the average number of ultrasound scans was 137 fewer than the ACEP benchmark. And only 47% of the responding programs in that survey said more than half of their faculty members were credentialed in ultrasound, according to the researchers.

Other reasons for the high discrepancy rate could be the fact that only difficult cases are referred for official radiology ultrasound studies, and that different equipment and techniques are used between the two groups of studies.

Additional retrospective and/or prospective studies may be useful to evaluate practices considering ER-performed obstetric ultrasounds and the overall appropriateness of these studies in settings where official ultrasound services are available 24/7, the researchers noted.

Study finds growing use of emergency imaging may be justified, February 4, 2015